When Dale Katechis is on a three-hour bike ride he has one thing on his mind: a cold beer. Beer and mountain biking may seem like an unlikely pairing. But for Mr. Katechis, the founder of Oskar Blues Brewery in Longmont, Colo., they are integral parts of his company’s culture. 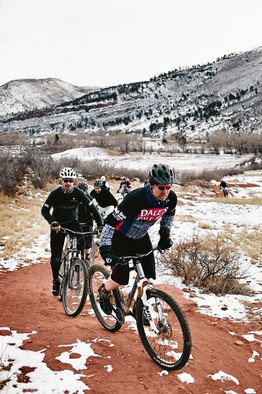 Benjamin Rasmussen for The Wall Street JournalDale Katechis rides with some of his employees and friends on a mountain bike trail in Hall Ranch in Lyons, CO.

On Tuesday nights, employees gather for group mountain bike rides that might last 3½ hours, followed by beer and food at one of the three nearby restaurants he owns. “We ride and race year round,” he says. “Even in the snow.”

Four days a week, Mr. Katechis has a personal trainer teach boot camp-style classes at the company gym he had built next to the brewery in 2008. Two days a week, yoga classes are offered. There is a weekly Oskar Blues run club. A massage therapist is on call two days a week. These perks are free for the approximately 275 people he employs. “It’s important to promote healthy living at work,” he says. “It’s the way I live my life. It also allows me the vices I love, like eating and drinking great beer.”

Mr. Katechis, 44 years old, raced BMX bikes in high school. He fell in love with mountain biking and began experimenting with home brewing when he was at Auburn University in Auburn, Ala. In 1997, Mr. Katechis opened the Oskar Blues restaurant in Lyons, Colo. In 1999, he built a home brew system in the restaurant’s basement, turned it into a brewpub and introduced Oskar Blues beer.

Mr. Katechis now has a 35,000-square-foot brewing facility in Longmont. Last year, he opened an East Coast brewery in Brevard, N.C., near Pisgah National Forest, one of his favorite spots to mountain bike. He is working on building a gym facility in North Carolina.

While one would think working at a brewery engenders lots of imbibing, Mr. Katechis says drinking during the day isn’t a part of the work culture. He has a quality panel of about 10 people who taste his beers. He says a beer quenches his thirst more than a Gatorade after a hard bike ride. “I want our Old Chub Scottish-style ale,” he says. “I think about it during the ride. It’s what I crave.”

Mr. Katechis is on his bike every day, and about six years ago he began doing core-strength workouts. “I really fell in love with workouts like CrossFit and decided to hire a personal trainer to train my wife and family as well as my staff,” he says. 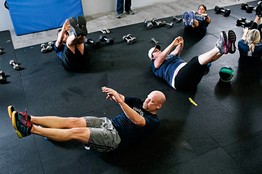 Benjamin Rasmussen for The Wall Street JournalMr. Katechis at the company gym next to the Oskar Blues Brewery in Longmont, Colo.

At 8 a.m. on Mondays, Wednesdays and Fridays, and at 5 p.m. on Tuesdays, many employees are at the gym doing walking lunges, crunches, and tossing medicine balls. A trainer leads what Mr. Katechis calls “In the Core” workouts, which incorporate plyometric exercises and use light weights or body weight. One day a week, a yoga instructor leads a class. “The other day I was partnered with a guy who was on his second day of the job at the restaurant,” he says. “We were able to work together at our own speeds doing crab walks, push-ups, plank pose and burpees.”

He gets out for a good mountain bike ride about four days a week. Once a week he goes on his “sanity ride” on the Hall Ranch Trail, a 12-mile trail in nearby Lyons, Colo., with a 13,000-foot elevation. On weekends, he goes on three or four-hour rides with friends.

Oskar Blues sells beer in 32 states and Mr. Katechis and his team travel to meet with customers and distributors, as well as to participate in beer festivals and events. Mountain-bike races and trail rides are worked into nearly every trip. In February when Mr. Katechis went to Phoenix for Arizona Craft Beer week, his team did the 24 Hours in the Old Pueblo mountain-bike race.

When the weather is nice, Mr. Katechis bikes to and from work and also accompanies his two youngest kids to school on his bike.

Mr. Katechis cooks breakfast for his kids in the mornings. He usually has three to four large mugs of coffee to start his day, along with a handful of blueberries and a protein shake. He eats a Clif bar around 10:30 a.m. and lunch is a salad from one of his two restaurants. He eats dinner with his family most nights. They often make pizza and have sushi at least once a week. His splurge is a good steak. “I’ll hold the dessert just so I can order the 16-ounce steak instead of the 12-ounce,” he says. 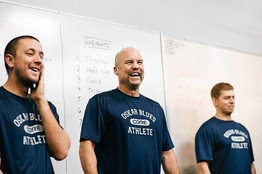 Benjamin Rasmussen for The Wall Street JournalDale Katechis, center, before an ‘In the Core’ workout with employees.

Mr. Katechis wears Newton running sneakers, which retail for between $125 and $175 a pair. “I suffered from a pretty severe case of plantar fasciitis [when the connective tissue on the sole of the feet becomes inflamed] and once I started running in Newton, I haven’t had a problem. They force you to stay off your heels and run on your toes.”

He wears a Nike+ FuelBand, which costs $149, to track his daily activity and calories burned. He owns 12 mountain bikes and one road bike.

“I am a big country music fan, but I also like Mackelmore and Alabama Shakes. I have to confess I’m a Justin Bieber fan. I know most words to his songs.”

Here are Dale Katechis’s favorite riding trails, located near one of his two Oskar Blues breweries:

From Trail to Suds: Four Mountain-Bike Rides With a Cold Reward

“Hall Ranch is the home trail for Oskar Blues,” says. Mr. Katechis. “It’s a tough, rocky, technical climb…plus it’s a rowdy descent. There is a rolling loop at the top that allows view of Longs Peak in Rocky Mountain National Park. ”

“DuPont is a great place to ride because you can piece together a ton of different fast and rolling routes throughout the more than 10,000 acres of forest. Many of the trails take you past waterfalls between Hendersonville and Brevard, N.C.” 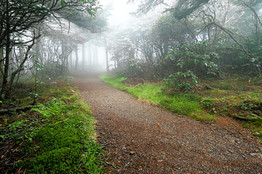 “Pisgah is such an inspiring and raw forest. I really like the rugged, technical and often wet riding conditions. The Tasty Weasel 2 taproom is right down the road from the gates to Pisgah National Forest so it’s great to be able to ride from the brewery and roll in for a post-ride beer.

“The Monarch Crest Trail is the quintessential Colorado high country [between 11,000 feet and 12,000 feet] adventure. The trail has great ups and downs, rocky sections, fun descents and views to enjoy over a trailside brew. To add to the fun, there is always that chance of afternoon thunderstorms.”

Write to Jen Murphy at workout@wsj.com

A version of this article appeared May 7, 2013, on page D3 in the U.S. edition of The Wall Street Journal, with the headline: A Colorado Brewer Mixes Exercise With Beer.